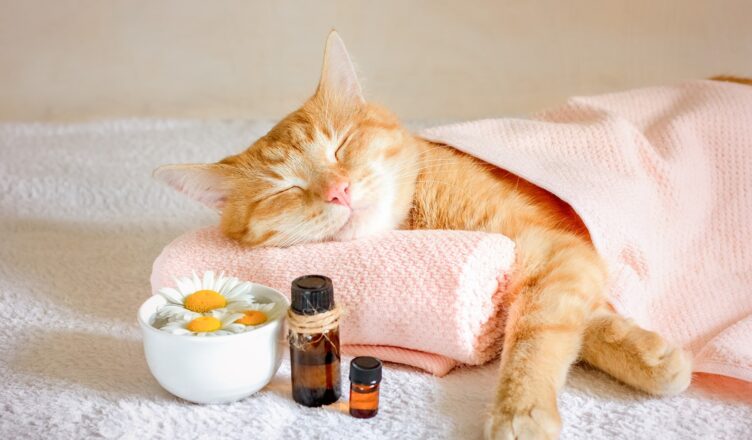 Reading Time: 7 minutes
Guide to homeopathy and cbd use for cats

Introduction to Homeopathy and CBD for cats: A brief analysis

Natural medicine is always preferred by many for healing. This is also for cats, especially because they are known to be resilient creatures that are good self-healers whenever they have illnesses. Instead of using very strong medicine, many just want to support the natural healing capabilities of our feline pets. Because of this, homeopathic medicine has been popular for some owners, especially for those who also use it for themselves.

Homeopathic medicine is a healing philosophy back from hundreds of years ago where illnesses are treated with the use of all-natural and organic methods.

One of its key differences from modern medicine is that it aims to exacerbate any symptoms felt by the body. This is very different from current healing practices as currently, symptoms are prioritized to be relieved, even for cats.

Take for example, if a cat is suffering from fever, modern medicine may advise medicine that aims to bring down their body temperature to normal. In contrast, homeopathy will instead advise to raise the temperature of their body. This is because of their “like cures like” thinking. As a fever is a natural body response to an infection, homeopathy followers want this to be hotter as to make the healing process faster. They use plants that are known to cause fever-like symptoms such as belladonna.

However, belladonna is dangerous when taken by cats as it is. Because of this, another dominant philosophy of homeopathic medicine is to dilute the substance to about 1/10th or less. Most homeopathic medicines are labeled as 20c or 30c which tells you how diluted it is. Through this, it becomes safe to ingest every day. This also removes any side effects.

For cats, homeopathy has been used as a remedy for illnesses such as:

Research about its effectiveness shows that it has mild effects. Many are attributing its effects, however, to the placebo effect.

The placebo effect, although not really a result of the ingredients ingested, can be effective as the mental health of the pet can greatly affect their health condition. As homeopathic treatments encourage close interactions with your cat, their condition can improve.

However, we cannot exactly call the homeopathic medicine ingested to be very effective in treating the illness. This is especially because its diluted form makes this insignificant once it enters the cat’s body.

Is CBD a form of homeopathy?

CBD is also a form of alternative medicine. Currently, it is still not labeled as a direct medicine for any form of illness as research about it is still ongoing. Because of this, many may think that it is a form of homeopathy. However, it is not.

First, CBD is not made to exacerbate any of the symptoms of the cat. Instead of making it worse, CBD instead aims to relieve issues in cats. Through this, they can be healthier and more capable of more activities.

Next, CBD is given in normal doses and is not diluted to very small levels. This is because CBD itself is safe when given in normal levels unlike those used for homeopathic medicine (which is why the latter needs to be diluted).

Where does CBD come from?

What makes them very similar, though, is that both are fully natural. After all, CBD is extracted from hemp plants. These come from the cannabis sativa class. In fact, before CBD was approved, the seed of hemp has long been legal to be used as a health supplement.

CBD comes in three blends. First is the full spectrum blend where all of the compounds found in its flower, leaves, stalks, and seed are mixed with the blend. This makes it very potent and effective in treating symptoms.

Second is the broad-spectrum blend which is similar to full spectrum blend except that it does not contain THC. The last blend is called CBD isolate as it removes any other parts of the hemp except for CBD.

As we can see, CBD is far from having a diluted form, and is instead given in normal levels. This is a very important distinction that sets it apart from homeopathic treatments.

How does CBD heal cats?

One of the primary uses of CBD is for treating chronic pain for cats. It has been seen to lessen the pain felt by cats suffering from arthritis and other illnesses that causes the swelling of joints and nerves. Through this, cats can become more mobile and comfortable when sleeping.

Next, it also has been used to make them calmer. CBD is often used for cats living in noisy areas, rescue cats, and those who are moving to a new environment.

CBD has also been seen to be effective for treating other illnesses such as seizures, gastrointestinal issues, and inconsistent sleep cycles.

Does CBD have side effects?

As mentioned, CBD is unlike homeopathic treatments as it does not dilute the blend. Because of this, CBD can have side effects when given improperly. The known side effects of CBD include:

Most of these are mild and generally go away fast. As CBD for cats are mildly dosed, these side effects only happen if the dosing is very high which means that it is very safe to use.

Which one should you use: homeopathic medicine or CBD?

In general, both are all-natural and do not have side effects when taken properly. However, we prefer using CBD. This is because it is supported both by science and by satisfied customers to be effective. Its symptoms are also visible within hours of usage. For example, a cat with anxiety will be more calm and friendly after taking it.

On the other hand, research on homeopathic medicine is inconclusive and does not seem to show solid evidence. It mainly relies on anecdotal evidence which is not sound evidence.

However, if you are an active advocate for the use of homeopathic medicine, feel free to use CBD alongside it. After all, there are no conflicting effects between the two. Because both are natural, its effects are instead expected to be good for each other.

Conclusion to Homeopathy and CBD for cats: A brief analysis

In conclusion, homeopathy and CBD are both used for cats and are fully natural, but they are not the same.

Homeopathic medicine is made by following the “like cures like” philosophy and also comes in diluted forms. On the other hand, CBD is made to relieve the symptoms felt by the cat similar to modern medicine. CBD is also not diluted in the same fashion as traditional homeopathic remedies for cats.

Between the two, we advise using CBD. However, you can also always use homeopathic medicine along with it as there are no conflicting effects between the two.

How can CBD help cats with Arthritis?

What are the benefits of CBD oil for cats?

How to use CBD oil for your cat

Can you use hemp oil for cats and what are its benefits?

This website uses cookies to improve your experience while you navigate through the website. Out of these, the cookies that are categorized as necessary are stored on your browser as they are essential for the working of basic functionalities of the website. We also use third-party cookies that help us analyze and understand how you use this website. These cookies will be stored in your browser only with your consent. You also have the option to opt-out of these cookies. But opting out of some of these cookies may affect your browsing experience.
Necessary Always Enabled
Necessary cookies are absolutely essential for the website to function properly. These cookies ensure basic functionalities and security features of the website, anonymously.
Functional
Functional cookies help to perform certain functionalities like sharing the content of the website on social media platforms, collect feedbacks, and other third-party features.
Performance
Performance cookies are used to understand and analyze the key performance indexes of the website which helps in delivering a better user experience for the visitors.
Analytics
Analytical cookies are used to understand how visitors interact with the website. These cookies help provide information on metrics the number of visitors, bounce rate, traffic source, etc.
Advertisement
Advertisement cookies are used to provide visitors with relevant ads and marketing campaigns. These cookies track visitors across websites and collect information to provide customized ads.
Others
Other uncategorized cookies are those that are being analyzed and have not been classified into a category as yet.
SAVE & ACCEPT